There are at least two attractive features of past life regression. Since therapists charge by the hour, the need to explore centuries instead of years will greatly extend the length of time a patient will need to be "treated," thereby increasing the cost of therapy. Secondly, the therapist and patient can usually speculate wildly without much fear of being contradicted by the facts. However, this can backfire if anyone bothers to investigate the matter, as in the case of Bridey Murphy, the case that started this craze in 1952. 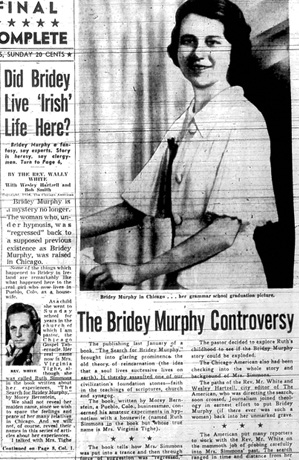 In 1952, Colorado businessman and amateur hypnotist Morey Bernstein put housewife Virginia Tighe of Pueblo, Colorado in a trance that sparked off startling revelatons about Tighe's alleged past life as a 19th-century Irishwoman and her rebirth in the United States 59 years later. Bernstein used a technique called hypnotic regression, during which the subject is gradually taken back to childhood. He then attempted to take Virginia one step further, before birth, and suddenly was astonished to find he was listening to Bridey Murphy.

Her rambling tale began in 1806 when Bridey was eight years old and living in a house in Cork. She was the daughter of Duncan Murphy, a barrister, and his wife Kathleen. At the age of 17 she married lawyer Sean Brian McCarthy and moved to Belfast. Bridey told of a fall that caused her death and of watching her own funeral, describing her tombstone and the state of being in life after death. It was, she recalled, a feeling of neither pain nor happiness. Somehow, she was reborn in America, although Bridey was not clear how this event happened. Virginia Tighe herself was born in the Mid West in 1923, had never been to Ireland, and did not speak with even the slightest hint of an Irish accent.

The 'facts' related by Bridey were not fully checked before the publication of Bernstein's book The Search for Bridey Murphy. However, once the book had become a bestseller, almost every detail was thoroughly checked by reporters who were sent to Ireland to track down the background of the elusive woman. It was then that the first doubts about her 'reincarnation' began to appear. Bridey gave her date of birth as December 20, 1798, in Cork, and the year of her death as 1864. There was no official record of either event. Neither was there any record of a wooden house, called The Meadows, in which she said she lived. Indeed, most houses in Ireland were made of brick or stone. She pronounced her husband's name as 'See-an', but Sean is usually pronounced 'Shawn' in Ireland. Brian, which is what Bridey preferred to call her husband, was also the middle name of the man to whom Virginia Tighe was married. But some of the details did tally. For instance, he descriptions of the Antrim coastline were very accurate. So, too, was her account of a journey from Belfast to Cork. She claimed she went to a St. Theresa's Church. There was indeed one where she said there was - but it was not built until 1911. The young Bridey shopped for provisions with a grocer named Farr. It was discovered that such a grocer had existed.

Despite the many holes in Bridey's story, it was still a remarkably detailed account of life in 19th-century Ireland - information unlikely to have come the way of Virginia Tighe. The case was studied by psychiatrists and psychologists, who had used hypnosis in treatment for many years. Many subjects, in deep hypnosis, can be highly suggestible and will act on the slightest hint given to them, seeking to supply the answer they subconsciously believe the hypnotist wishes to hear. Such hypnosis is largely a matter of releasing relevant details from the brain's incredible capacity for storing information. For instance, the subject can speak in a foreign language not used since childhood, and in which they would not be able to converse in normal conscious life. A subject can even quote verbatim from a long-forgotten childhood book. However, someone under hypnosis is not automatically telling the truth even if they are seeking to give a satisfactory response. Bernstein admitted that, while she was under hypnosis, he did tell Virginia Tighe what he wanted, and it was then that she became Bridey Murphy.

THE SHE CREATURE (1956) – Inspired by the Bridey Murphy/ Virginia Tighe past life story made famous in 1952. Lovely Marla English is hypnotized and summons a past life of the titular (pun intended) She Creature (played by Paul Blaisdell). 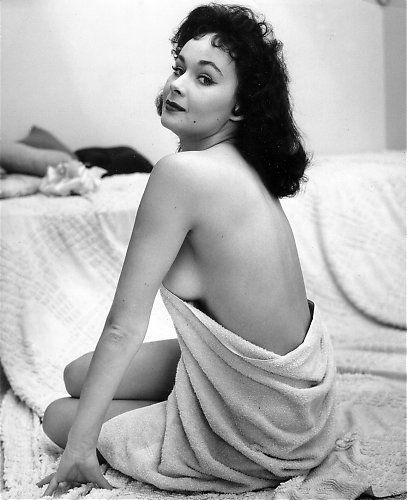